This article was provided by Coaches Network

Intangibles are the big X-factor in high school sports. Everyone has seen teams fall apart during the stress of competition. Seemingly routine tasks become overwhelming and all sense of teamwork is lost. The situation won’t improve when a coach does little more than tell players, “We have to communicate better and play as a team.”

Coaches want and expect their athletes to show traits such as communication, hustle, positive attitude, and leadership, but how much time do they spend on developing these qualities during practice? Intangibles may be impossible to measure objectively, but they certainly can be taught the same way measurable physical skills are. In an article on Team USA Volleyball Jason Seaford, a volleyball coach in Virginia Beach, Va., uses several methods to help his players develop the intangibles that win games and make coaches’ jobs easier and more fun.

One interesting method is something he calls “taking heat.” As detailed in an article on the USA Volleyball website,  Seaford asks his players to practice taking blame for each others’ mistakes by saying things like “my fault” or “that one’s on me” when a neighboring player makes an error.

He starts doing this during low-stress practice situations and the players always seem to enjoy it. Then, when things begin to unravel as the intensity ramps up later in practice, he reminds them to “take some heat” for each other. Instantly, he says, attitudes change and sighs and heavy shoulders turn into high fives and smiles. Once they have done this enough in practice, Seaford is able to transfer it to games, keeping common mistakes from spiraling into a run of errors.

Seaford points out that the idea of “taking heat” for teammates is not remove responsibility from the player who erred, but rather it’s a way to support that player. He tells his players that regardless of who touches the ball, each player on the floor is responsible for the end result. A missed spike may have ended the point, but perhaps earlier in the point someone could have made a better pass or not played a ball from the opponent that would have been out.

Seaford says he came up with the idea after thinking about a player who was not only very talented, but also had a great attitude. Without any prompting, she would naturally “take heat” for her teammates so no one would feel bad and the team could move on to the next play. He adds that he remembers asking a team one time who was the player they most enjoyed playing with and the answer was a player who fell in the middle of the team skill-wise. When he asked the players why they enjoyed playing with her so much, they responded, “because she never gets upset when you make a mistake.”

Another way Seaford promotes teamwork is by having players draw a teammate’s name from a hat. They are then responsible for showing that player as much support as possible during the practice. 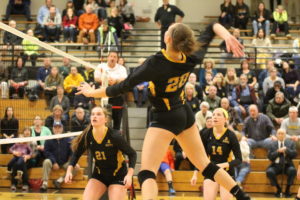 He also works on communication by stopping practice in the middle of a drill to take a time out just like in the middle of game. He then spends 30 seconds giving directions on changes he’d like to see them make when they resume the drill. The idea is to get the players used to learning to make these adjustments as well as helping him learn how to best speak in a way that will help the players quickly and easily understand what he wants them to do.

During offseason workouts, he picks a specific trait he’d like them to develop, such as hustle, motivation, communication, and so on. He starts practice by talking a little bit about the selected trait and doing some activities to improve it. Then, instead of drills, he spends most of the session in game play and asks the players to focus on the chosen trait. Then at the end of practice, he’ll point out a player or two he felt excelled in that area.

“Out of all the camps, clinics and various programs that I teach, I can honestly say that this intangibles program gets results,” he says. “I truly see players develop what I feel is an important part of their game, right before my very eyes.”