Coach Forman is currently the assistant volleyball coach at Midwestern State University. Before that he was the Head Coach of the professional women’s team at Svedala Volleybollklubb in Sweden

Synopsis: This drill gets a lot of players active on one court working on serving, passing, setting and hitting – and potentially blocking and defense.

Age/Skill Level: This is a drill for intermediate and higher levels.

Execution: Set the players up as shown in the diagram below – two passer/hitters on each side, two servers behind the end lines, and one setter on each half court. The half courts run independently as separate drills. The drill begins with a serve going to the pair of Passer/Hitters with the setter on their side. One of them passes the ball. The setter sets to either P/H. That player than goes to become the server on their side. The setter switches sides and the drill repeats for the other side. The server then goes in to replace the P/H who hit the ball the repetition before. 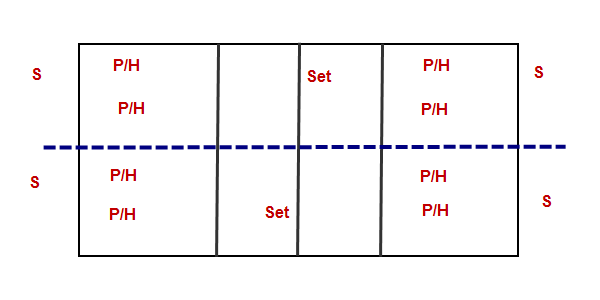