Coach Forman is currently the assistant volleyball coach at Midwestern State University. Before that he was the Head Coach of the professional women’s team at Svedala Volleybollklubb in Sweden

This is a drill which can be used to put hitters into a competitive situation for the purposes of assessment..

Age/Skill Level: This is suitable for intermediate to advanced players

Execution: Place three back row players (including a setter) and a blocker on one side, and a setter, a defender, and an Outside Hitter on the other side as per the diagram below. The 4-player side serves every ball to either the defender or OH. The teams then play through a rally. On the receiving side the OH must attack every ball (if possible). On the serving side, only back row attacks are permitted. Play out 10 rallies and keep track of how many times the OH’s team wins. 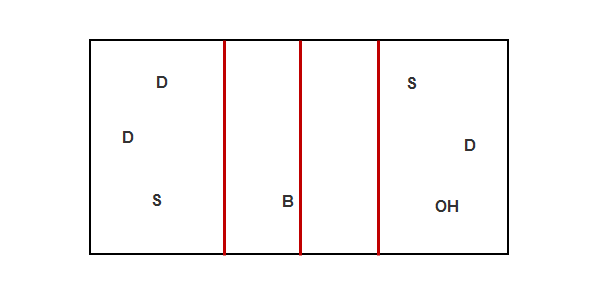