The following post is courtesy of Coach Tom Houser.

Coach Houser is currently sixth all-time in career coaching victories in Virginia with a career record of 267-47. He has been coaching travel volleyball since 1991, and his teams have qualified for Jr Nationals 4 of the past 11 years. He is the owner of STAR Volleyball Services LLC which conducts numerous clinics around the country.  Click the link CoachHouser.com to gain access to more valuable coaching tools. You can also contact Coach Houser at [email protected]

Year after year.   When a pass is so far off target that a hitter has to set it, I’ve expected my athletes to set the ball to who’s asking for it.  Meanwhile, a teammate was supposed to be asking for it!

Last year I said “uncle.”   I had to find another way.  So, I implemented “setting hexagons”.  In fact, I now tell my hitters to “set the hexagons,” and like magic, hitters as young a 7th grade are setting each other!  I was actually amazed!

It’s really pretty simple.  One day I got to the gym early and put some court tape in the spots you see below.

Reasoning for leaving out the middle and the C targets:  I really don’t want anyone setting a fast tempo set to our middle except a trained setter or right-side.

I don’t think the middle wants that either.  Also, since we were running a 6-2 offense last season, I wasn’t going to encourage my athletes to set a C either. 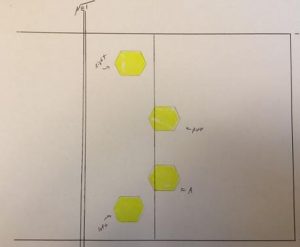 Please notice how I made the two front row hexagons off the net and inside the court.  Very safe sets for the non-setters on the team.  Nope, I will not allow my hitters to put 30% of those sets into the antenna, into the official, into the scorer’s table, etc. while they are trying for the perfect set.   Nope.  With the targets where I put them, now 90% our attempts will be close enough to attack; thus, I expect my hitters to tip, roll or hit those!   They want a perfect set?  From their OH?  From their MB? They’re joking, right?

Meanwhile, notice how the pipe and A targets are more aggressive.  Reason:  No antennas, referees, tables, etc. that can end the drill.  In other words, if a hitter is 5’ off target on a front row 3rd tempo left-side or right-side set, that’s too risky.  But if a pipe or A sets is 5’ off, the rally won’t end.  So, let’s go for those!

OK, how do I teach this?  On this day, our warm up drill was the “Shank Pass Drill”.  In this drill, 6 girls are at base, and I’m in their court with a ball in my hand.   I holler out “double block on their OH. GO!” The team moves to that position, the blockers jump, then I toss a ball anywhere on the court.  If the setter says, “Jenny TAKE IT!” then Jenny steps in and sets to a hexagon.  (On my team, the setter will take the ball unless she calls a name!).  The drill can be scored a number of ways: