Today’s post is provided by Coaches Choice and was taken from an eBook entitled Coaching Volleyball: Offensive Fundamentals and Techniques edited by Kinda S Lenberg. The entire eBook may be found at the Coaches Choice Volleyball Coaching Library.

Every summer, thousands of junior players attend volleyball camps around the country. Camps provide great opportunities for players to improve their skills and expose them to a wide range of coaches and techniques. As players reach higher levels, it becomes more important for them to understand why and how they do what they do. This chapter will explore some of the necessary thought processes and tactics that are essential for setting the offense.

Keys to Look For

Early in the match, the setter should look to see if there is a weak blocker and how the blockers (especially the middle blocker) respond to different types of offense. In each rotation, there are three basic opportunities for the setter to look at the blockers: before, during, and after the play. The setter must recognize where the weakest blocker is and take advantage of any mismatches that may exist. For example, if the left-front hitter is a dominant hitter and the opponent’s right-front blocker is smaller or weak, the setter must run an offense that attempts to hold the middle blocker and allows the left-front hitter to hit one-on-one against the weak blocker. Against larger teams that may not have a weakness at the net, the setter must test the middle blocker to see how he responds to different types of sets. 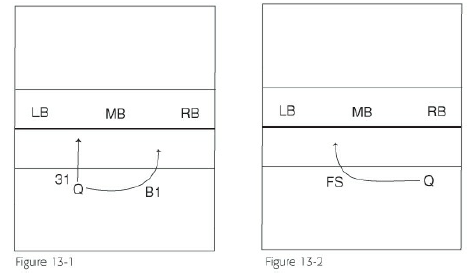 The term “bunched” means that the outside blockers are starting in a position one to two meters into the court from the antenna. This puts the outside blockers into a position where they can help block the quick attack and combination set and still have time to move outside to block the higher outside sets. In this scenario, the setter should be able to set a fast set to either antenna. If executed properly, the outside hitter will gain advantage of being able to hit against blockers who are reaching outside, against a block that is not well-formed, or both. If a weak blocker is in the front row, the setter can either run a spread offense (make blockers cover the

entire net) to get a hitter one-on-one with the weak blocker, or can overload the weak blocker. Refer back to the previous scenario with a weak right-front blocker and a front left-side attacker. In this instance, the setter must attempt to draw the middle blocker away from the area of weakness. This goal may be achieved by establishing the quick hitter on a B1 or BS. The middle blocker must stay with the quick hitter and will have a difficult time blocking a fast set to the left-side hitter.

Overloading a weak blocker means that the setter will run two or more hitters into the zone near the weakness. Figures 13-3, 13-4, and 13-5 show three different scenarios for overloading a very weak blocker. 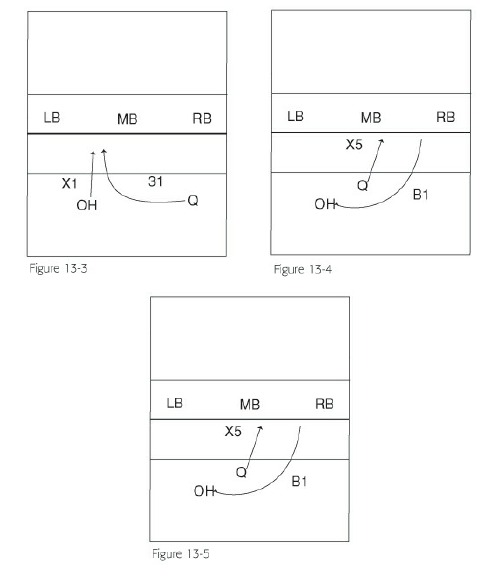 Watching the blockers during the play is the most difficult for a setter because he is concentrating on the ball. However, an experienced setter can perceive the movements of the blockers as the play develops, and a coach can help by watching the middle blocker from the sideline. Several possibilities may exist for blockers moving during the play. 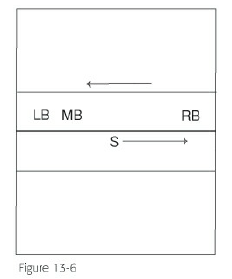 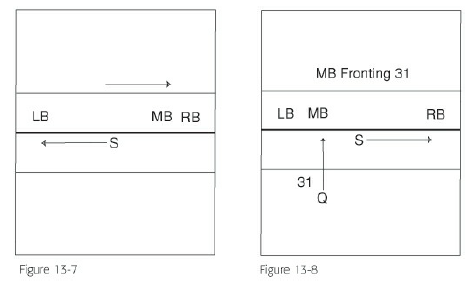 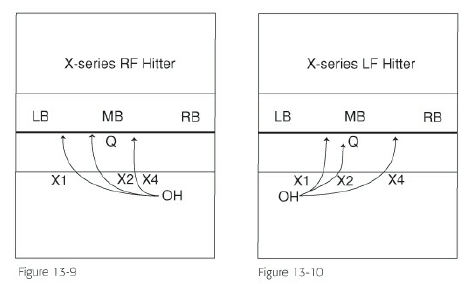 When a team read blocks, the players react to the initial speed and direction of the set ball. Read blocking is one of the toughest skills to master. A good read blocking team is very disciplined; a team with mastery of this skill can make it extremely difficult to score points. Against a read blocking team, the setter should try to set a fast offense and force the middle blocker to move and make decisions. If possible, the setter should establish the quick attacker early in the match so that the middle blocker is forced to protect against the quick attack. This situation is also a great opportunity to run the combination play sets (X-series), but set the quick hitter. What often happens is the blockers will not jump on the quick hitter because they see or hear an outside hitter is moving inside to hit a play set. The combination hitter creates a diversion for the blockers and forces the blockers to make quick decisions. With an experienced setter, it is often difficult for the blockers to distinguish between the quick set and the play set by the initial speed and direction of the ball. Consequently, running the combination play but setting the quick hitter may cause problems for an unsuspecting, read blocking team that is waiting to block the play set.

Once the ball is terminated, the setter can look at the blockers to see how they attempted to defend against the offense. The setter will be able to see if the middle blocker committed on or fronted the quick hitter; if the outside blockers are spread or bunched to help out with the quick attack; and if the blockers are switching positions at the last minute to try to hide a weak blocker.

In addition to watching the blockers and knowing what type of offense to run, the setter can also jump set to help create one-on-one opportunities for the hitters. Jump setting helps to   make the setter more deceptive, and it speeds up the offense. Jump setting is especially effective with an experienced quick hitter who is up early; it can increase the speed of the quick attack and give the blockers less time to react to the set ball.

As the experience and the ability level of the setter increases, he must know what to look for and how to run a tactical offense that will create opportunities to give the hitters an advantage against the defense.