In the video clip below legendary UCLA coach Al Scates discusses the fundamentals of the serving.

Coach Scates had a remarkable career winning NCAA Championships in

This clip was taken from Coach Scates’ comprehensive course. In the video course Coach Scates and his UCLA team demonstrate essential volleyball skills and a variety of individual and team drills. Among the topics covered are: serving, passing, setting, hitting, blocking and defense. This video is a great resource for players and coaches at any level of competition.

The video has audio so please make sure that your speakers are turned on.

Regarded as one of the top volleyball minds in the country, Brian Gimmillaro will have administrative oversight of both the beach and indoor volleyball programs at Long Beach State. Honored in 2008 with induction into the AVCA Hall of Fame, Gimmillaro has led his Alma Mater to three NCAA Championships and eight Final Four appearances in women’s volleyball and will help usher in a new era as the leader of an emerging sport in sand volleyball.

Coach Gimmillaro goes over every detail as it relates to the volleyball blocking technique. This course is great for coaches and players of all ages. It is a must for players looking to play at the collegiate level and for volleyball coaches looking to successfully coach the sport.

We are providing this drill to give you ideas on how to enhance your current practice drills. The idea is not to implement it exactly as is, but rather to tweak it to make it fit your system.

There is sound with the video, so please make sure that your sound is on.

This is a Vimeo video, so you will need to be on a network that does not block Vimeo videos.

If you would like to see more information about Coach Gimmillaro’s entire presentation, click this link: Championship Blocking

More effective blocking can be accomplished by teaching these two techniques: Early Arms and Attacking the Block.

While the natural tendency of the body is to extend the legs and arms together, to be an effective blocker you must teach players to extend the arms early.

The arms must extend first and then the body will follow.

The second technique that Coach Miret discusses is attacking the block.  He stresses that he wants his players to rotate aggressively into the block. They should not begin rotating until they make contact with the ball.

To accomplish this turn he explains that they should extend their inside leg back behind them as this will help them rotate towards the center of the court and turn away from the net.

While some would be concerned that this causes the player to land on one leg, Coach Miret discusses the proper technique for landing on one leg that will reduce ACL injuries.

The video below is just a segment of Coach Miret’s presentation at a recent Glazier Clinic. For more information about gaining access to the full presentation as well as hundreds of others like it click the link Glazier Volleyball Clinics

From the Hudl Blog

If your team knows how to serve spe­cif­ic zones, you’ll be ready to rule the court.

Karch Kiraly said it best, ​“The serve is the only tech­nique that is total­ly under your control.”

It’s real­ly all in your hands. If you can con­trol your serves, then you can con­trol the oth­er side of the court. And in high school vol­ley­ball, if you’re a strong serv­ing team, you’re going to be tough to beat.

Here’s how to get there.

If your play­ers can serve dif­fer­ent zones, you have a bet­ter chance of find­ing your oppo­nents’ weak­ness­es. Once you iden­ti­fy where that is, you’ll be able to go after it aggres­sive­ly and make your oppo­nent much eas­i­er to defend.

It’s extreme­ly impor­tant to call spe­cif­ic zones dur­ing a serve. Not doing this is like not telling a quar­ter­back what play he needs to run on the foot­ball field. And it goes hand in hand with scout­ing your opponents.

Go through each of their rota­tions to find their pass­ing ten­den­cies. Use your find­ings to attack spe­cif­ic passers or zones where your oppo­nents struggle.

We use two types of zone serv­ing, depend­ing on the age of our athletes.

This is a basic zone serv­ing strat­e­gy. It’s eas­i­ly under­stand­able and fol­lows rota­tions so it’s easy to remem­ber, regard­less of age or skill.

This type of serv­ing takes a lot of prac­tice to learn, so we reserve it for old­er, more advanced play­ers. It’s divid­ed between deep and short serves. 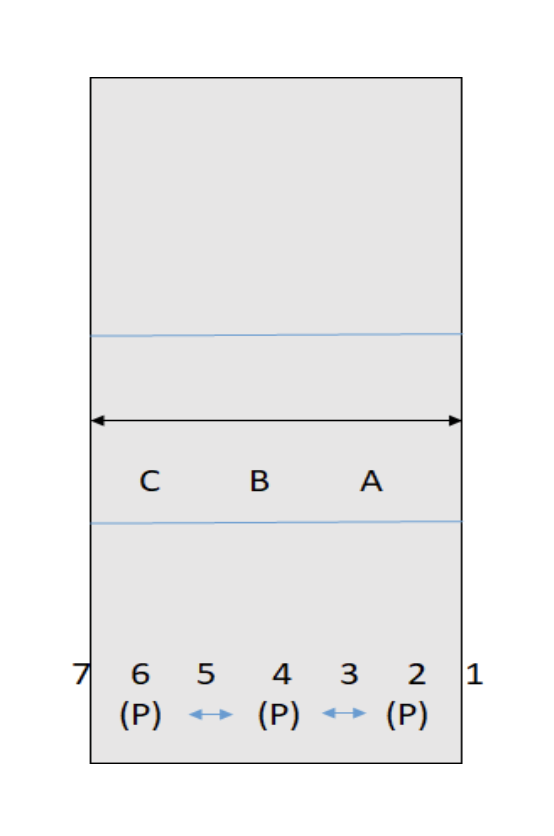 Zone 1: Sideline clos­est to right back

Zone 3: Between play­ers in right back and mid­dle back

Zone 5: Between play­ers in mid­dle back and left back

Zone 7: Sideline clos­est to left back

How to Apply It

Serving zones allows for tons of dif­fer­ent strate­gies. For instance, we keep the ball short when our opponent’s attack­ers are run­ning across the net in serve receive. In the­o­ry, this will clog up the mid­dle of the court and will some­times pre­vent a team from run­ning their mid­dle attack­er. For oppo­nents who have a great mid­dle attack­er, throw­ing in short serves is important.

Another strat­e­gy is to find the out­side attack­er that’s step­ping back into serve receive. Move her around. Serve her short and deep. Start track­ing her ten­den­cies to see if she pass­es bet­ter out of one spe­cif­ic rota­tion than anoth­er. If you keep pres­sure on your oppo­nents’ out­side attack­ers, they’ll often become tired and less effective.

We also look for rota­tions where there are stacks of play­ers lined up on one side of the court, and try to serve on or over those stacks. This can cause com­mu­ni­ca­tion errors between the front and back row. It also makes it tough for the pass­er that’s behind the stack to track the serve.

This skill needs to be touched on in every prac­tice. Some days we work on hit­ting zones, some days we focus on serv­ing under pres­sure, and some days we con­cen­trate on mak­ing our ser­vice bet­ter (faster, more aggres­sive, or more controlled).

Serving style is impor­tant too — decide what works best for your team. Most of my kids serve float balls because it’s hard­er to read as a pass­er, and you can con­trol the serve well. Once in a while, you might get an ath­lete who can serve a top­spin ball well. It’s impor­tant to eval­u­ate this serve and decide whether or not you think the play­er is able to con­trol it and can still put the ball in the zone you’re call­ing. If it works for your team, and your play­er is com­fort­able with it, go for it!

What if your play­ers are miss­ing serves? It might not be as seri­ous as you think. We’re will­ing to miss serves deep if we’re play­ing a team with a lot of ball con­trol. If we serve aggres­sive­ly, we can hope to put them out of sys­tem and make them eas­i­er to defend.

But you don’t want to let it go too far. We set a goal for how many missed serves are allowed. It varies based on who we’re play­ing and how aggres­sive we need to serve, but in gen­er­al, it’s two missed serves a set.

Even if your play­ers don’t hit the zone 100% of the time, if they can do it the major­i­ty of the time, the results will speak for themselves.

Lind­say Peter­son has been a var­si­ty head coach for eight years. She played for the Uni­ver­si­ty of North Alaba­ma, help­ing them win the DII Nation­al Cham­pi­onship in 2003. Peter­son has led her Mil­lard North High School team to the state cham­pi­onship tour­na­ment sev­en times, win­ning in 2016 and 2018. She was named one of the top 40 coach­es in the coun­try by the AVCA, and Coach of the Year by the Oma­ha World-Herald.

Peterson wrote this arti­cle with the help of her assis­tant coach, Lindsay Grant. Grant has coached at Millard North High school for eight years, and is also a club coach for Nebraska Juniors.

Like most skills effective Back Setting comes down to mastering just a few basic fundamentals.

In the video clip below University of Northern Colorado Head Coach Lyndsey Oates breaks down the fundamentals of back setting, shares some key coaching points and offers a drill to help master this important skill.

She begins her instruction by saying when the ball comes the setter will “catch” the ball with hands up and then “move” the ball back along then “release” with the hands facing forward. She stresses that the setter should not allow her fingers to point backward (said another way the palms should not be facing up) and that the palms should remain facing forward.  If the palms finish up the ball will have topspin and be difficult to hit.

Other key coaching points include:

The video has audio so please make sure that your speakers are turned. Click the arrow to play.