Coach Forman is currently the assistant volleyball coach at Midwestern State University. Before that he was the Head Coach of the professional women’s team at Svedala Volleybollklubb in Sweden.

I spent three weeks with a pair of German professional teams, I had a conversation with one coach about player jump counts. He was starting to use the VERT device to track jumps in training.

It gave him a guideline as to when to shut things down. I had a similar conversation during one of the Volleyball Coaching Wizards interviews. It became the basis for a podcast.

All of this came after Volleywood posted something which suggested what I saw as a ridiculously high average player jump count. They said, “Most volleyball players jump about 300 times a match.” With no supporting evidence, I should note.

I posted a comment contesting that idea. As this article shows, however, that idea somehow spread.

So what’s the truth?

The folks at VERT published a set of figures based on NCAA women’s volleyball. The following comes from an email they sent out which I received. 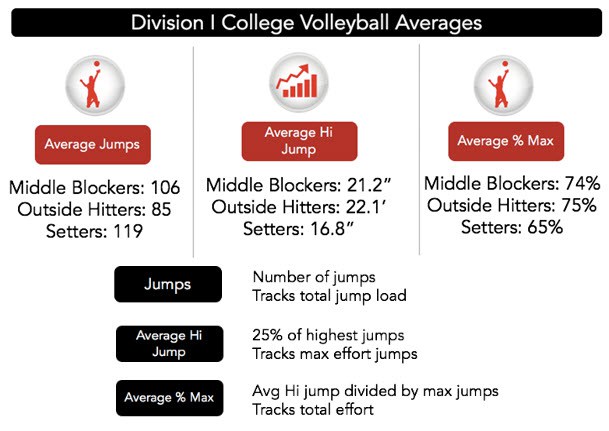 So setters jump the most, followed by middles, then outside hitters (probably including right sides). Notice none of them are anywhere close to 300. Yes, these are averages, but I’m hard-pressed to imagine any player in even the longest match getting to 300. Maybe, maybe hitters got that high back in the sideout scoring days when matches could go very long. Even then, that would be on the very high end, not the norm.

And according to the article I linked above, research indicates the average is significantly lower for beach players than indoor ones. Though for them you have to factor in playing multiple matches per day.

Training implications
So what does this mean for us as coaches?

It means it doesn’t make a whole lot of sense to have players do 150 or 200 jumps a day in practice when they will do far fewer in matches. If we do, then we are likely over-training, which puts us at risk of injury as a result of either fatigue or overuse. And we shouldn’t just think about jumps in practice here. We also have to consider jumps from strength training as well. It all adds up.