In this video Bill Wadley recently retired Men’s Swimming Coach Ohio State discusses shaping and changing cultural barriers and shifting well-established habits which becomes the challenge of cultural shaping. Coach Wadley discusses the goals and barriers that impact faculty and staff success and how to simplify systems and structure. This presentation also explains how culture can be the springboard for establishing student life goals which enhance learning.

The video is applicable to coaching any sport, not just swimming.

This video is provided by Glazier Clinics’ Head Coach Academy

Please make sure that your sound is on and click on the video to play.

Everything you need to get started with Hudl.

Sign up below and they will be in touch.

Offer is only valid in the U.S. and Canada for new schools and clubs purchasing Hudl products. Limited supply available. Minimum purchase required. Cannot be combined with other Hudl discounts. Full payment must be received to reserve your kit.

This drill was provided by Coaching Volleyball

Coach Forman is currently the assistant volleyball coach at Midwestern State University. Before that he was the Head Coach of the professional women’s team at Svedala Volleybollklubb in Sweden. He also coached at Rhode Island and Brown University.

There are a lot of questions which come to mind when considering a starting line-up. This isn’t just for inexperienced coaches. It’s something we think about for basically every team, and often from match to match. The decision of what to put on the line-up slip comes in two parts. First is the placement of players on the court relative to each other. Second is in which rotation they start the set.

When it comes to the order of placement of the players on the court, two factors generally dominate the considerations.

The first thing you absolutely need to look to do is create as balanced a line-up as you possibly can. You won’t come up with something where all six rotations are equally strong. You definitely want to keep anyone rotation from being excessively weak, though. That’s a guarantee of finding yourself stuck giving up points in bunches. As much as it might sound great to have one really strong rotation to try to score runs of points, that rarely works out. Just too many ways to give up the sideout that ends the string. This is why most line-ups put stronger players next to weaker ones and away from each other.

Not that offense is the only focus. Blocking, defense and passing can also come into the equation as well.

While balance is generally a question of which players are either next to our away from each other, serve reception considerations often come down to the order in which the players are placed on the court. This is where the question of whether the MB leads the setter (serves immediately before) or follows (serves immediately after in the rotation. Coaches generally favor the MB leads pattern when running 5-1 and 6-2 offenses. It allows the setter to push up toward the net more easily and offers some additional positional options. That doesn’t mean it’s always the best option, though.

Once you have your players positioned relative to each other it’s time to think about the starting rotation. Here a number of things need to be considered. Generally speaking, the idea is to give your strongest point scoring rotation out first, but that’s not necessarily a simple thing. Here are some potential ways to look at it.

Particularly in the younger age groups where serving can dominate, it can make a lot of sense to have your strongest server be the first one back at the line. That means you start them in Position 1 if you have serve to start the set, or Position 2 if the other team serves first. Another way to think of this is in terms of clusters of good servers. If you have two or three next to each other in the rotation, you could have them be the first ones to hit the service line, even if there is one player who is individually stronger than any of those in the cluster.

Flipping around, you could also think in terms of putting your weakest server(s) toward the back of the service order. This limits how often they serve, and by extension any negative influences from them doing so poorly.

I personally tend not to favor my best server going first – all else being equal. I’ve just found that the first serve of a set is subject to negative influences. As a result, putting your best server first often works like them going last in terms of their actual influence. I have absolutely no problem putting a weak server last, though!

If you run a 5-1 system where the setter has to play front row where they may be a blocking liability, it might make sense to start them in Position 1. That minimizes the amount of time they spend in the front row. This can apply to any position really. For example, a smaller OH could be started in the back row.

The reverse of this is maximizing the time a particularly strong front row player is at the net. That means starting them in Position 4, or perhaps Position 5.

This sort of thing also tends to limit the time you’re in a weak rotation and/or increase the time in your strongest one.

In some cases you may want to consider creating a favorable match-up against the opposition by starting in a certain rotation. Put your best blocker against their best hitter, your strongest OH against a small blocking S, a strong server against a weak serve receive rotation, etc. Or you could set the rotation to avoid certain match-ups.

A bit of caution is needed here, though. Just as balance is generally desirable to avoid getting stuck in a bad rotation, the same thing should be considered when looking at match-ups. It could be that trying to pit your best attacker against the opponent’s weakest blocker also creates the opposite situation. You want to make sure you keep from ending up with you having a weak rotation against the other team’s strong one.

You’ll save time with Hudl Assist. But it can mean a few initial adjustments to your routine and workflow. So we put together a few tips to help get you ramped up for season and ready to use Assist.

It All Starts with Video

Hone the perfect setup to get video that’s not only easier to watch, but more beneficial to your team. It’ll also ensure the stats provided by our analysts are accurate.

Record behind your side of the net.

The best vantage point is behind the end line on your side of the net. It can be a tight squeeze, but recording from this angle gives you an opportunity to better analyze positioning. To record effectively from the end line, have your device either far enough away to see both deep corners or high enough to get the full court.

You want to see your players, not the net. Switch sides with your team to guarantee a great view. The provided setup should be quick and easy to move between sets.

Only pause at timeouts.

To keep up with the flow of the game, you only want to pause at timeouts or between sets. Even if there’s a call in question, keep recording so you and our analysts can catch the outcome.

With Assist, you can see player actions and uncover tendencies you might not have discovered otherwise. Filtering by rotation can play a huge role in this. When you submit to Hudl Assist and enter your rotations, add the information based on how you track it for your team.

For example, your rotation 1 might have the setter serving. No matter how you track your rotations in your lineup, simply let us know which rotation starts each set. Pro tip: Keep it consistent through the season and you’ll uncover insights on how each rotation performs across all stats. 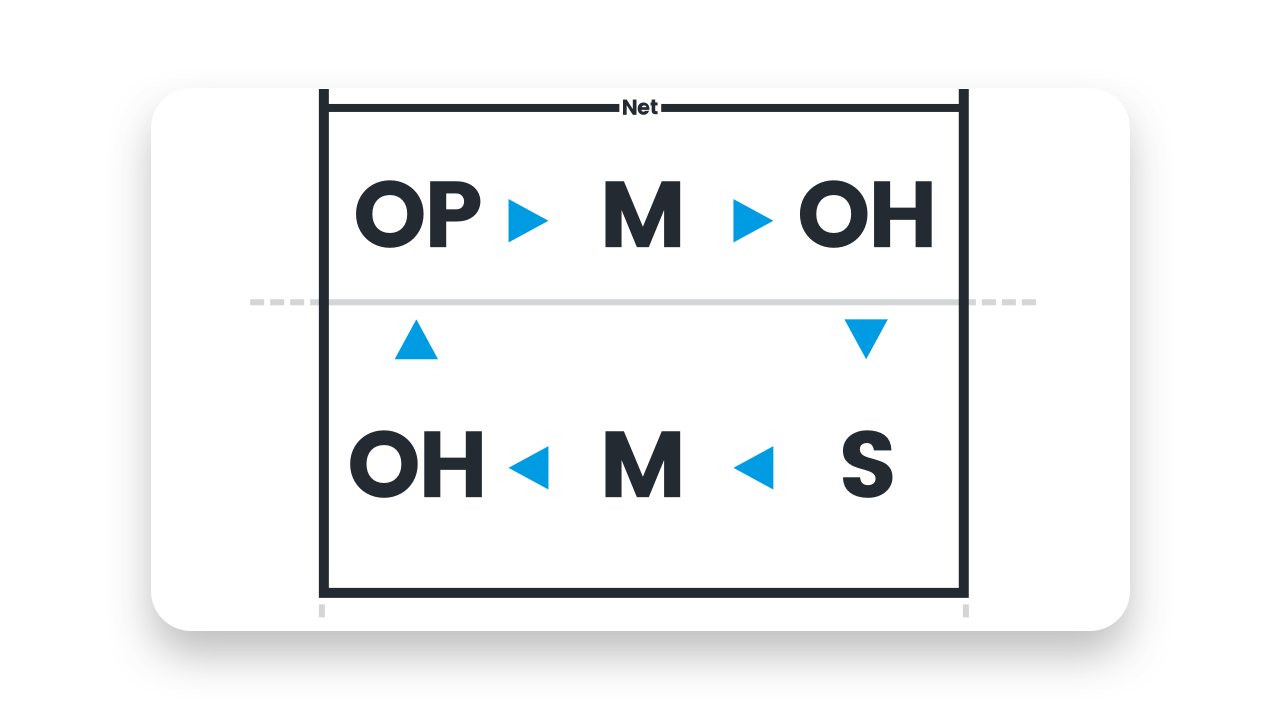 Rotation 2: The player following the first setter, usually an outside, serves.

Rotation 4: The opposite/right side or second setter serves.

Rotation 5: The player after your opposite, usually your other outside, serves.

Rotation 6: The player after your rotation 5 server, usually your second middle, serves.

Use this rotation data to confirm your coaching instincts. Maybe you have a feeling that something is off with a certain rotation. After a look at the data, you realize that the opponents’ hitting percentage is up in that rotation and your team’s blocks are significantly down. Use that insight to create a practice plan to improve your defensive output.

Once you add your rotations, submit the match score — the number of sets you won compared to your opponent. This will help us track the flow of the game to generate accurate stats for your team.

Before your game, make sure you have an updated roster with current player names and jersey numbers. We track stats by those jersey numbers, so it’s important that they’re correct.

Get these added so your athletes are listed on the current season. Only athletes listed on this season’s roster will pull into Hudl Assist — otherwise their stats will be attributed to “Unknown Athlete.” We don’t want to credit your graduated libero with an ace just because she’s still listed on the team. So list the season for all active players to avoid any issues.

When you record your games, check that you can clearly see players’ numbers. Whether you need to get a lens for your iPad or change your vantage point, you want to be sure it’s a clear shot.

Once you have full stats from Assist, dig deeper into tendencies with our volleyball reports. And if you have additional questions, check out our Help Center.